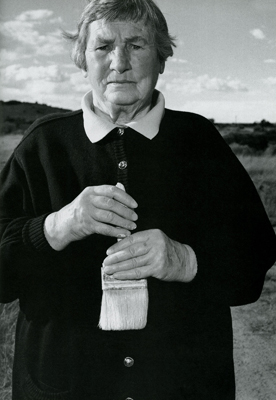 Agnes Martin was born in 1912 in Macklin, Saskatchewan, Canada, and grew up in Vancouver, British Columbia. She came to the United States in 1932 and lived in Washington and Oregon until 1940. Martin studied at Western Washington State College, Bellingham, and the University of New Mexico, Albuquerque. She received her BS and MA from Teachers College, Columbia University, New York and taught at public schools in Washington, Delaware, and New Mexico during the late 1930s and the 1940s, at the University of New Mexico in the late 1940s, and at Eastern Oregon College, La Grande, in 195253. She became a United States citizen in 1950.

Martin lived and taught periodically in New York in the 1940s and early 1950s. In 1957, she settled in Coenties Slip in lower Manhattan, where her friends and neighbors included Robert Indiana, Ellsworth Kelly, and Jack Youngerman. In 1958, her first solo show took place at Section Eleven of the Betty Parsons Gallery, New York. By the late 1950s, Martins landscape and figurative watercolors, surrealistic oils, and three-dimensional sculptural objects were supplanted by her highly simplified abstractions. These mature worksdistinguished by square formats, grids, lines drawn on canvas, and monochromatic color with subtle variations in huehave been an important influence for younger artists. In 1966, her work was included in the exhibition Systemic Painting at the Solomon R. Guggenheim as representative of the Minimalist art current in New York.

After Martin left New York and moved to Cuba, New Mexico, in 1967, she did not paint for seven years. However, she returned to painting in 1974 and produced a number of works in which she replaced neutral tones with brighter color. After 1973, she exhibited regularly and major traveling exhibitions of her work have been organized by the Institute of Contemporary Art at the University of Philadelphia (1973), Hayward Gallery in London (1977), Stedelijk Museum in Amsterdam (1991), Whitney Museum of American Art in New York (1993), and Dia:Beacon in New York (2004). Her writings were published in 1992 in conjunction with her exhibition at Kunstmuseum Winthur in Switzerland and again in 2005 by Hatje Cantz Publishers. Martin has been honored with, among other awards, the Skowhegan Medal of Painting and Sculpture (1987), Oskar Kokoschka Prize (1992), Golden Lion at the Venice Biennale (1997), National Medal of Arts from the Office of the President, and Lifetime Acheivement Award from the Womens Caucus for Art (2005). Martin died in Taos, New Mexico, in 2004.