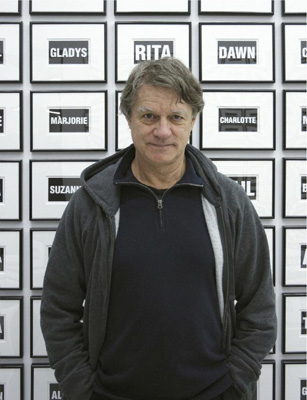 Allan McCollum was born in 1944 in Los Angeles. In 1946 his family moved to Redondo Beach, California, where he lived until 1966. He briefly studied restaurant management and industrial kitchen work at Los Angeles Trade Technical College, but decided to educate himself as an artist in 1967. In lieu of formal art education, he read the writings of artists of the international Fluxus movement, and of conceptual artists including Daniel Buren and Sol LeWitt. He also began working as a truck driver and crate builder for an art handling company in West Hollywood and learned about the mechanisms of the contemporary art world through meeting artists, art dealers, collectors, and curators. Establishing his first studio in 1970 in a converted parking garage on Venice Beach, McCollum soon began exhibiting work in Nicholas Wilder Gallery and Claire Copley Gallery, both in Los Angeles.

He moved to New York in 1975, settling in the SoHo neighborhood. Early on, his work focused on the intersection of mass production and the uniqueness, both material and conceptual, of the art object. His series Over 10,000 Individual Works (198788), exhibited in 1988 at John Weber Gallery, New York, comprised rows of miniature objects, each one cast separately from a unique combination of found household items, such as bottle caps and kitchen tools. McCollum repeated this process in 1989 in a series of thousands of drawings, each one created using a unique combination of hundreds of plastic drafting templates according to a systemic, nonrepetitive process. McCollum’s interest in the mass production of images and objects, and in layers of uniqueness and difference, led him to mass media as a source. In his Perpetual Photo series (198289), he photographed television stills, obscuring his source material through cropping and enlargement, creating a visually frustrating hybrid of copy and original.

In a recent work, The Shapes Project (2005), McCollum employed a computerized combinatorial system to generate billions of similar but nonrepeating shapes from combinations of 300 “parts,” ostensibly to provide one “for every person on the planet.” Since then, he has used the database of shapes to produce both prints and sculptures in Plexiglas, Corian, plywood, hardwood, metal, and other materials. In his 2010 publication The Book of Shapes, McCollum further explored his interest in combining conceptual and material accessibility with theoretical ideas on the “uniqueness” of the art object. The publication provides both the 300 basic shape parts and instruction for generating all possible combinations of those parts.

McCollum has been the subject of over 100 solo exhibitions at institutions including Artists Space, New York (197980); Portikus, Frankfurt (1988); Van Abbemuseum, Eindhoven, Netherlands (1989); Denver Art Museum (1990); Musée d’art moderne de Lille Métropole, Villeneuve d’Ascq, France (1998); and Musée d’art moderne et contemporain, Geneva (2006). His work was included in Aperto at the 1988 Venice Biennale and in the So Paulo Biennial (2008). McCollum has produced numerous public art projects in the United States and Europe. He lives and works in New York.