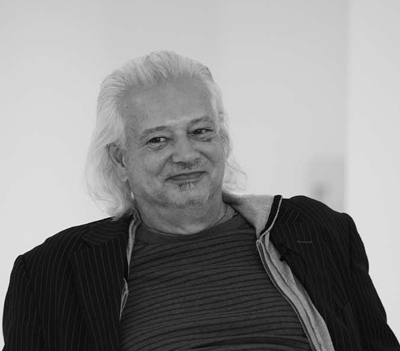 Allen Ruppersberg, born in 1944, is an American artist.  He is one of the first generation of American Conceptual artists that changed the way art was thought about and made.  His work includes paintings, prints, photographs, sculptures, insstallations and books.  Born in Cleveland, Ohio, Ruppersberg graduated in 1967 with a Bachelor of Fine Arts degree from the Chouinard Art Institute (now the California Institute of the Arts) in Los Angeles, California.

During his early years in Los Angeles, he began significant relationships with John Baldessari, Ed Ruscha, William Wegman and Allan McCollum.  He participated in teh 1969 exhibition “When Attitudes Become Form,” and is recognized as a seminal practitioner of installation art, having produced works including “Al’s Cafe” (1969), Al’s Grand Hotel” (1971) and “The Novel that Writes Itself” (1978).

Ruppersberg has been awarded the United States Artists Award in 2011, the Oliver Fellow for Visual Arts.  Ruppersberg currently lives and works in Los Angeles and New York City.