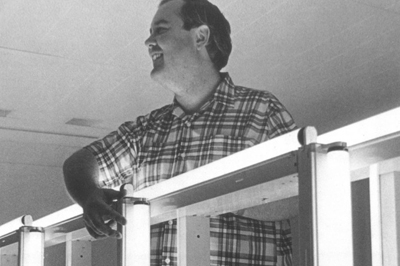 Dan Flavin was born in 1933 in New York City, where he later studied art history at the New School for Social Research (1956) and Columbia University (195759). His first solo show was at the Judson Gallery, New York, in 1961. Flavin made his first work with electric light that same year and he began using commercial fluorescent bulbs in 1963.

Major exhibitions of Flavins work include those at the Museum of Contemporary Art, Chicago (1967), the National Gallery of Canada, Ottawa (1969), and the Staatliche Kunsthalle, Baden-Baden (1989). In 1983, Dia opened the Dan Flavin Art Institute in Bridgehampton, New York. In 1992, Flavin created a monumental installation for the reopening of the Solomon R. Guggenheim Museum, New York. He died in 1996, leaving designs for a light installation for Milans Chiesa Rossa that was realized posthumously with Dias support.