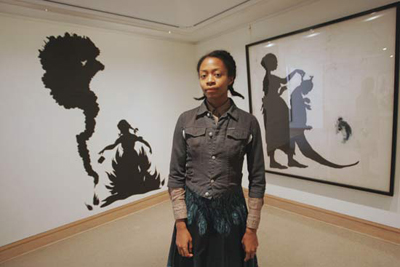 Kara Walker was born in 1969 in Stockton, California, and grew up in Atlanta, Georgia. She received a BFA in painting and printmaking from the Atlanta College of Art in 1991 and an MFA in painting and printmaking from the Rhode Island School of Design in 1994. Beginning with Gone: An Historical Romance of Civil War as it Occurred Between the Dusky Thighs of a Young Negress and Her Heart (1994), she became known for her panoramic friezes of cut-paper silhouettes, usually black figures against a white wall, which address the history of American slavery and racism through violent and unsettling imagery. Gone includes a tree bough that suggests a typical novelistic setting for a lovers meeting, yet all manner of surreal activity takes place: the woman of a white couple that is about to kiss has four legs; the man seems to touch the bottom of a nearby black boy with his sword; this boy is holding a swan that has emerged from a black woman, who floats on the water (a set of metaphors for miscegenation). The installation No mere words can Adequately reflect the Remorse this Negress feels at having been Cast into such a lowly state by her former Masters and so it is with a Humble heart that she brings about their physical Ruin and earthly Demise (1999) introduced white as well as black silhouettes against a gray background. Here Walker explored the motif of the slave rebellion gone wrong: slaves (including a figure of Liberty wearing Mickey Mouse ears) battle one another instead of their masters. With The Emancipation Approximation (19992000), Walker incorporated color into her work, retaining the earlier themes of slavery and miscegenation. Since Why I Like White Boys, an Illustrated Novel by Kara E. Walker (2000), her illustrations have increasingly functioned as environments for the viewer. In this work and ones to follow, colored light is projected onto the gallery walls to complement the silhouettes, which explore the theme of collective memories of slavery in relation to problems of racism in the present. For After the Deluge (2006), Walker blurred the lines between artist and curator when she presented her own works alongside pieces she selected from the collection of the Metropolitan Museum of Art to articulate her visual commentary on the displaced victims of Hurricane Katrina.

Walker has had solo exhibitions at the Nexus Contemporary Art Center in Atlanta (1995), San Francisco Museum of Modern Art (1997), Centre dArt Contemporain Genèva (1999), Des Moines Art Center (2001), Deutsche Guggenheim Berlin (2002), University of Michigan Museum of Art in Ann Arbor (2002), Williams College Museum of Art in Williamstown, Massachusetts (2003), Tate Liverpool (2004), Metropolitan Museum of Art in New York (2006), and Walker Art Museum in Minneapolis (2007), among other venues. She has also exhibited in many group shows, including the Whitney Biennial (1997), Istanbul Biennial (1999), Bienal de São Paulo (2002), Moving Pictures at the Solomon R. Guggenheim Museum and Guggenheim Museum Bilbao (2002 and 2003), Drawings from the Modern at the Museum of Modern Art in New York (2005), and the Venice Biennale (2007). She received fellowships from Art Matters and the John D. and Catherine T. MacArthur Foundation in 1997, and the Lucelia Artist Award from the Smithsonian American Art Museum (2004). She currently teaches at Columbia University and lives and works in New York.