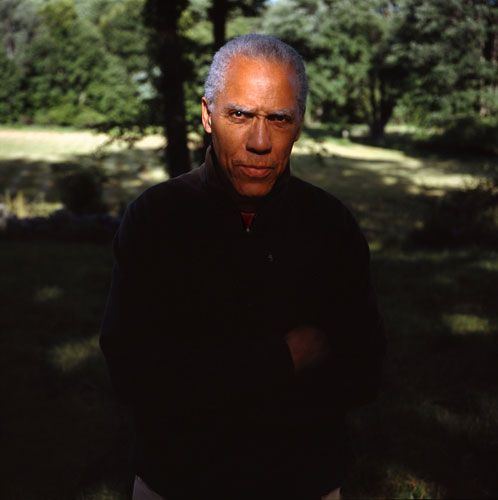 Born in 1941 in Washington, D.C., Martin Puryear was the oldest of seven children. From a young age, he constructed things such as a bows and arrows and guitars. Puryear attended Catholic University of America in Washington, D.C., majoring in biology before switching to art. Between 196466 he served in the Peace Corps in Sierra Leone, where he taught English, French, biology, and art. There he sketched the West African flora and fauna and learned the craft of local carpenters. After a backpacking trip in 1967 in Lapland with his brother, Puryear spent two years at the Royal Swedish Academy of Arts in Stockholm. He studied printmaking in his coursework while working on independent sculpture projects. He also spent a few weeks assisting cabinetmaker James Krenov. As he had done in Africa, Puryear took the opportunity to investigate popular, local craft traditions, but he also sought out modern Scandinavian design. Puryears preference for using unadulterated materials and clearly visible methods of construction was evident at this time. His practice of interweaving strips of wood appeared in early sculptures. The artists first solo exhibition, at the Gröna Palletten Galleri in Stockholm, was held in 1968.

After returning to the United States, Puryear studied at Yale University, earning an MFA in 1971. Among the visiting instructors who made an impression on him were Robert Morris and Richard Serra. While the unitary forms of Minimalist art would influence him, he would reject both its strict geometry and its industrial fabrication. He further immersed himself in the methods of carpenters, coopers, and patternmakers around this time.

Shortly after leaving Yale, the artist joined the faculty of Fisk University in Nashville. He taught at the University of Maryland in College Park in 197478. While teaching in Maryland, he maintained a studio and residence in the Williamsburg neighborhood of Brooklyn. A 1977 a fire destroyed many of his possessions and artworks. To put this loss behind him, he left the East Coast for Chicago, where he taught at the University of Illinois.

In the mid- to late 1970s, many of Puryears sculptures reflected his interest in traditional boatbuilding techniques; he also created yurtlike forms. He began making large outdoor works, such as Box and Pole (1977), a commission for Artpark in Lewiston, New York, in the late 1970s. In 1981 he went on a month-long canoe trip in Alaska with his brother. The next year, with the aid of a John Simon Guggenheim Memorial Foundation fellowship, he traveled to Japan to study architecture and garden design. Puryear stopped teaching in the late 1980s to devote more time to his art. He began building a studio and home in Accord, in upstate New York, and took up residence there in 1990. Since then, he has extended his engagement with whimsical craftsmanship to both large, site-specific installations and smaller-scale works created in his studio. One of his best-known works, Ladder for Booker T. Washington (1996), consists of a thirty-six-foot-tall serpentine ladder that tapers at the top so as to exaggerate a perspectival illusion of distance and inaccessibility.

Puryear has created public art projects for such venues as the River Road Station of the Chicago Transit Authority, Chevy Chase Garden Plaza in Maryland, Belvedere Park in Battery Park City, New York, and the National Oceanic and Atmospheric Administration in Seattle. His major solo exhibitions include a show at the Corcoran Gallery of Art (1977) and traveling surveys organized by the University Gallery, University of Massachusetts in Amherst (1984), Art Institute of Chicago (199193), Virginia Museum of Fine Arts (200102), BALTIC Centre for Contemporary Art in Gateshead (2003), and Museum of Modern Art in New York (2007). His work has appeared in the Whitney Biennial (1979, 1981, and 1989), Bienal de São Paulo (1989), where he was the grand-prize recipient, and Documenta (1992), as well as in numerous group exhibitions devoted to African American art, public art, and contemporary sculpture. Among the numerous awards Puryear has received are fellowships from the National Endowment for the Arts (1978) and the John D. and Catherine T. MacArthur Foundation (1989). In 1992, he was named to the American Academy and Institute of Arts and Letters.