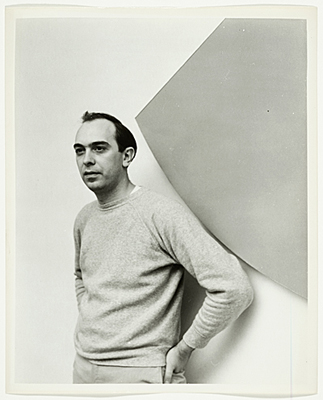 Robert Mangold was born in 1937 and spent his youth in Buffalo, New York. In 1956 he enrolled in the illustration department of the Cleveland Institute of Art. Within a year, he had transferred to the fine-arts division of the school in order to pursue an education in painting, sculpture, and drawing. While studying at the institute in 1957, Mangold traveled to see the Carnegie International in Pittsburgh, where he gained exposure to the work of a wide variety of Abstract Expressionist painters, including Willem de Kooning, Adolph Gottlieb, Franz Kline, and Jackson Pollock. That same year, he attended a major exhibition of Clyfford Stills paintings at the Albright-Knox Art Gallery in Buffalo. Subsequently, Mangolds painting reflected an interest in Abstract Expressionism as well as in the work of Alberto Burri and Antonio Tàpies. He began producing large-scale abstract paintings, moving away from an earlier interest in naturalism. After graduating in 1959, he was awarded a fellowship to attend the Yale Summer School of Music and Art, Norfolk, Connecticut, and in the fall of 1960 he entered the graduate program at the Yale University School of Art and Architecture, New Haven. There, he experimented with a variety of stylistic idioms. His classmates included Nancy Graves, Brice Marden, and Richard Serra. He married fellow art student Sylvia Plimack in 1961, and they moved to New York upon the completion of his MFA in 1962. He took a position as a guard at the Museum of Modern Art, moving after a few months to an assistants position in the museums library. At the museum, he met a number of artists also working as guards there, including Robert Ryman and Sol LeWitt.

By 1964 Mangold had moved into his signature Minimalist painting style. His first solo exhibition, entitled Walls and Areas, was held at the Fischbach Gallery in 1965. The exhibition consisted of large paintings on Masonite and plywood; some works were painted thickly to approximate sections of wall, while others were sprayed to produce lighter effects. From 1964 through 1973, Mangold was affiliated with Thibaut and Fischbach galleries in New York and had numerous exhibitions in European galleries. In 196566, the Jewish Museum, New York, mounted the first major exhibition of Minimalist painting, which included Mangolds work. Mangold became an instructor in the fine-arts department of the School of Visual Arts, New York, in the mid-1960s. His second solo exhibition held at Fischbach Gallery in 1967 featured his experiments with sections of circles on board and Masonite.