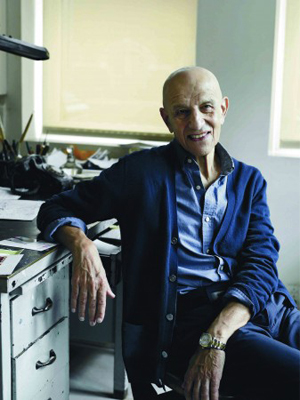 Alex Katz was born in Brooklyn, New York in 1927. In 1928, at the outset of the Depression, his family moved to St. Albans, a diverse suburb of Queens that had sprung up between the two wars. Katz was raised in St. Albans by his Russian parents. His mother had been an actress and possessed a deep interest in poetry and his father, a businessman, also had an interest in the arts.

Katzs first one-person show was held at the Roko Gallery in 1954. Katz had begun to develop greater acquaintances with the New York School and their allies in the other arts; he counted amongst his friends figurative painters Larry Rivers and Fairfield Porter, photographer Rudolph Burckhardt, and poets John Ashbery, Edwin Denby, Frank OHara, and James Schuyler. From 1955 to 1959, usually following a day of painting, Katz made small collages of figures in landscapes from hand-colored strips of delicately cut paper. In the late 1950s, he moved towards greater realism in his paintings. Katz became increasingly interested in portraiture, and painted his friends and his wife and muse, Ada. He embraced monochrome backgrounds, which would become a defining characteristic of his style, anticipating Pop Art and separating him from gestural figure painters and the New Perceptual Realism. In 1959, Katz made his first cutout, which would grow into a series of flat sculptures; freestanding or relief portraits that exist in actual space.

In 1968, Katz moved to an artists cooperative building in SoHo, where he has lived and worked ever since. He continues to spend his summers in Lincolnville, Maine.