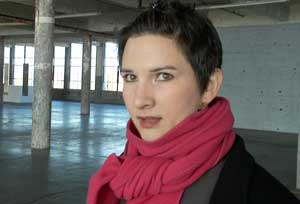 Curtis initiates each of her works which are then perpetuated and resolved by audience. For each installation, Curtis instigates a desired vision through provided guidance. Then, by relinquishing these concepts to her collaborative audience, her work sometimes proceeds in unanticipated ways. These uncontrollable unknowns are likewise crucial components of her work.

From 1998 to 2016, Curtis completed an 18-year project, 9 solo-biennial exhibits of large-in-scope, interactive art in 9 vast mill spaces throughout Maine. In the end, Curtis mounted 81 participatory installations while cleaning by hand each historic space (averaging 25,000 square feet). Each solo biennial was a 22-month process exploring a different, predetermined theme, inviting audience to activate each exhibit’s 9 unique works.

After Curtis’s 18-year project was finished, she had been working toward new interactive projects for 5 weeks in her studio, when she was debilitated by a neurological illness. After 2 psychiatric wards, the start of severe movement and speech disorder, and 15 months of unknowns, it was finally determined that Curtis’s brain had been attacked by untreated Lyme Disease.

Since the start of her disability in March 2017, Curtis has been moving forward and exhibiting new interactive concepts with help from assistants, curators, and the arts community. Curtis works from Lyman, Maine.