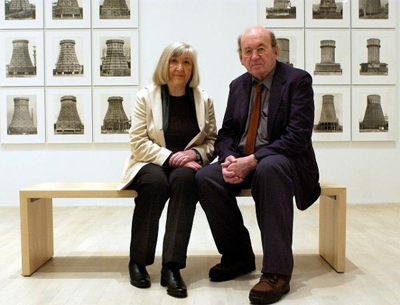 Bernd Becher was born August 20, 1931, in Siegen, Germany. He studied painting and lithography at the Staatliche Kunstakademie Stuttgart from 1953 to 1956 and studied typography at the Staatliche Kunstakademie Düsseldorf from 1957 to 1961. Hilla Becher was born Hilla Wobeser on September 2, 1934, in Potsdam, Germany. She studied painting at the Kunstakademie Düsseldorf, where she met Bernd Becher. The two artists first collaborated in 1959 and were married in 1961. They began working as freelance photographers, concentrating on industrial photography.

From their first series of photographs of water towers, the artists have not veered from architectural portraiture subjects, using both industrial and domestic structures such as gas tanks, silos, framework houses, and the like. They were given their first gallery show in 1963 at the Galerie Ruth Nohl in Siegen and by 1968 were exhibiting in the United States as well as in European cities outside Germany. In 1972, the artists began showing at the Sonnabend Gallery, New York. In 1974, the Institute of Contemporary Arts, London, organized an exhibition of their work, which toured the United Kingdom. The couple was invited to participate in Documenta in Kassel in 1972, 1977, and 1982, and at the São Paulo Bienal in 1977. The Stedelijk Van Abbemuseum, Eindhoven, organized a retrospective of the artists work in 1981. In 1985, the artists had a major museum exhibition, which traveled to the Museum Folkwang Essen, Musée dArt Moderne de la Ville de Paris, and Musée dArt Moderne de la Ville de Liège, Belgium. In 1991, the artists won the Leone dOro award for sculpture at the Venice Biennale. (In 1969, the artists had called the architectural subject matter of their photographs anonymous sculpture.) The Venice installation was reworked later in 1991, in a retrospective exhibition at the Kunstverein, Cologne. The Typologies installation was exhibited again in 1994 at the Ydessa Hendeles Art Foundation, Toronto.