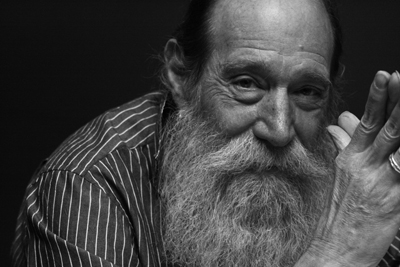 Lawrence Weiner, one of the central figures of Conceptual art, was born in 1942 in the Bronx, New York. After graduating from high school, Weiner had a variety of jobshe worked on an oil tanker, on docks, and unloading railroad cars. He traveled throughout North America before returning to New York, where he exhibited at Seth Siegelaub Contemporary Art in 1964 and 1965. Weiners early work included experiments with systematic approaches to shaped canvases and later, featured squares cut out of carpeting or walls.

A turning point in Weiners approach came in 1968, when he created a work for an outdoor exhibition organized by Siegelaub at Windham College in Putney, Vermont. Weiner proposed to define the space for his work with rather unobtrusive means: A series of stakes set in the ground at regular intervals to form a rectangle with twine strung from stake to stake to demark a grida rectangle removed from this rectangle. When students cut down the twine because it hampered their access across the campus lawn, Weiner realized that his piece could have been even less obtrusive: viewers could have experienced the same effect Weiner desired simply by reading a verbal description of the work. Not long after this, Weiner turned to language as the primary vehicle for his work, concluding in 1968 that: (1) The artist may construct the piece. (2) The piece may be fabricated. (3) The piece may not be built. [Each being equal and consistent with the intent of the artist, the decision as to condition rests with the receiver upon the occasion of receivership.]

Like other Conceptual artists who gained international recognition in the late 1960s and early 1970s, Weiner investigated forms of display and distribution that challenge traditional assumptions about the nature of the art object. As the sole contribution to a presentation organized by Siegelaub in 1968, Weiner created a small book entitled Statements; since the work consisted of nothing but words, there was no reason to display a physical object. That same year, Weiner also contributed pages to Siegelaubs Xeroxbook, a compendium of photocopies by seven Conceptually oriented artists.

The wall installations that have been a primary medium for Weiner since the 1970s consist solely of words in a nondescript lettering painted on walls. The lettering need not be done by the Weiner himself, as long as the sign painter complies with the instructions dictated by the artist. Although this body of work focuses on the potential for language to serve as an art form, the subjects of his epigrammatic statements are often materials, or a physical action or process, as exemplified by such works as ONE QUART GREEN EXTERIOR INDUSTRIAL ENAMEL THROWN ON A BRICK WALL (1968) or EARTH TO EARTH ASHES TO ASHES DUST TO DUST (1970). In others, the subject involves a translation from one language to another or an encounter with a national boundary, as in THE JOINING OF FRANCE GERMANY AND SWITZERLAND BY ROPE (1969). In the succeeding decades, Weiner explored the interaction of punctuation, shapes, and color to serve as inflections of meaning for his texts. In 1997, he created Homeport, an interactive environment for the contemporary art web site Adaweb.com, in which visitors can explore a space defined by linguistic rather than geographic features.

Major solo exhibitions of the artists work have been mounted at the Hirshhorn Museum and Sculpture Garden, Washington, D.C. (1990), Institute of Contemporary Arts, London (1991), Dia Center for the Arts, New York (1991), Musée dArt Contemporain, Bordeaux (1991 and 1992), San Francisco Museum of Modern Art (1992), Walker Art Center, Minneapolis (1994), Philadelphia Museum of Art (1994), Museum Ludwig, Cologne (1995), Deutsche Guggenheim in Berlin (2000), Museo Tamayo Arte Contemporáneo in Mexico City (2004), and Tate Gallery in London (2006). In 2007, the Whitney Museum of American Art organized the first major retrospective of the artists work in the United States. In addition to publishing numerous books, Weiner has produced various films and videos, including Beached (1970), Do You Believe in Water? (1976), and Plowmans Lunch (1982). Weiner lives and works in New York.