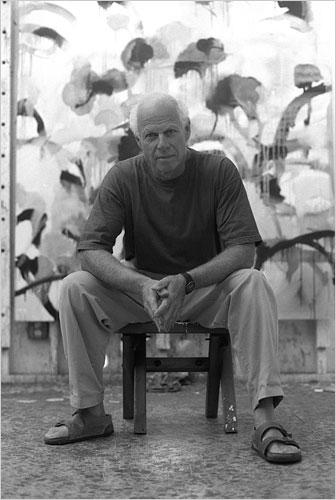 Michael Mazur had been making prints, drawings and paintings for over 50 years. His work has been shown in over 150 solo and group exhibitions, and is included in most major public and private collections throughout the country.

His work has been exhibited at MOMA, The Whitney Museum of American Art, The Brooklyn Museum, and the Metropolitan Museum of Art. His work can be found in various collections in Chicago, Philadelphia, Houston, San Francisco and abroad in museums in Canada, England, Italy and Germany, Columbia, South America, South Korea, and Canberra, Australia. A retrospective of his prints opened at the Museum of Fine Arts, Boston in 2000, traveling to the Minneapolis Art Institute, and Stanfords Cantor Center, among others. Hudson Hills Press published THE PRINTS OF MICHAEL MAZUR including a catalogue raisonne. His recent INFERNO OF DANTE, a suite of 41 etchings, with text by Robert Pinsky, has won critical praise and was first exhibited at Museo di Castelvechio, Verona and The American Academy in Rome with a catalogue by Electa Editions. It toured the US between 2005-2007, organized by CATE, Pasadena, CA. His writing has appeared in the Catalogue of the Painterly Print from the Metropolitan, Museum, in ART NEWS, The PRINT COLLECTORS NEWSLETTER, ART ON PAPER, and M-E-A-N-I-N-G on the on line magazine ART KRUSH; He has won awards from the Tiffany Foundation, The National Institute of Arts and Letters, the Guggenheim Foundation and a Distinguished Career award from the Southern Graphics Council. He was a full time faculty member at RISD, Brandeis University, and later, a visiting artist for many years at Harvards Carpenter Center. He served on the Boards of the Artist Foundation in Boston, MA, the Council for the Arts and Humanities, and was an Overseer of the Museum of Fine Arts in Boston. Mazur was on the Board and Visual Committees of the Fine Arts Work Center in Provincetown Massachusetts and was its Co-Chair from 1997 until 2001.