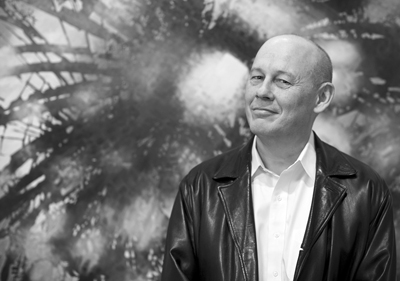 Mike Glier draws and paints to explore topics of common interest. He also teaches, which he considers to be a part of his creative output. Masculinity, consumerism, and conflict were subjects for much of his early work. For the last two decades, however, he has focused on the human relationship with the environment. “My landscape projects are propelled by a number of things, including the love of paint and abstraction, but most importantly, by a desire to do my part to help make the changes in philosophy that are required if humanity is to create a sustainable future. By studying the land and responding to it freshly, I hope to demonstrate attachment, respect and engagement. And if the paintings are good enough, they will find their way into public life to do their job of representing the joy of living in the world and the wonder of perceiving it, and if they succeed at this, to evoke the will to create balance within it.”

In the late 70’s and 80’s, Mike was an active member of Collaborative Projects, participating in the Time Square Show and organizing Art Direct, a mail order catalog of art by Colab artists.

Also, during this period he participated in several Group Material exhibitions including “Mass”, “Resistance”, “The Constitution”, “Politics”, and “AIDS Timeline”.

In relation to the feminist dialog at the time, he made a series of satirical drawings about masculinity which were exhibited at Anina Nosei Gallery, NY under the title, White Male Power: Senators, Game Hosts, National Monuments, Popes, etc.

Between 1979 and 2000 he was engaged with Printed Matter Inc., NY, serving on the staff and the Board of Directors.

Mike is the recipient of a Guggenheim Fellowship in painting and the New England recipient of Awards in the Visual Arts.

In 2004, Town Green, a permanent wall drawing installation for the Cambridge, MA, City Hall Annex was selected by Americans for the Arts as one of the best public art works of the year.

A ten-year survey exhibition was presented at Hallwalls, Buffalo NY in 1988 and a 35-year survey was offered in 2014 at the Opalka Gallery, The Sage Colleges, Albany. A book entitled Meander, Because You Can’t See Much While Marching, which includes essays by Thomas Crow, Lucy Lippard, and David Breslin accompanies this survey.

In 2007 Glier completed Along a Long Line, a series of plein air paintings created along a line of longitude that stretches from the Canadian tundra to the Ecuadorian rainforest. He has recorded this effort in a book, Along a Long Line, published in 2009 by Hard Press Editions.

His current series of drawings and paintings, The Forests of Antarctica, is based on plein air drawings made in the forests of the Berkshires, the coast of Maine, the central mountains of New Mexico and the Virgin Islands.