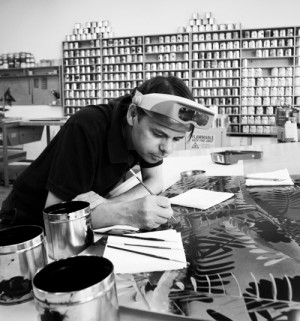 Ray Charles White was born in 1961 in Toronto, Canada.  White has lived and worked in New York since the early 1980’s. He studied photography with Ansel Adams in Yosemite, and then at the School of Visual Arts and the New School in New York, before beginning his career photographing for Andy Warhol’s Interview Magazine. He also is known for his portraits of celebrated cultural figures including William Burroughs, David Hockney, Louise Bourgeois, Tony Bennett,  and Allen Ginsberg among others. In an essay on White’s work Henry Geldzahler (former Dia curator & curator of 20th Century Art, Metropolitan Museum of Art) wrote: It was David Hockney, who, in many sessions of working and talking, emphasized to Ray that one of the true subjects of photography is the ebb and flow of the life of the moment, the continuum of time and space in which photographer and subject find themselves. Ray brings no theoretical considerations to bear in his work, no gimmicks, no preordained compositional preferences. Lit naturally, laying bare the workings of time. Ancient and immediate. He fixes his images tenderly yet forcefully.

White’s work has been shown both nationally and internationally and can be found in the collections of the Tate, London, FAE-Musee DArt Contemporaine, Lausanne, Switzerland, California State University, Modern Collection, and the Dia Art Foundation, New York.

White has worked with Jean-Paul Russell since the late 80s.