The oldest work in the show, LeWitts 1988 ”Complex Forms” is a group of three etchings.  Seemingly a progression, as one is denser than the next which is denser than the next, yet when one looks closely, one can see that the forms are not exactly repeated and so they are in fact separate images.  Utilizing line etching, cross-hatching and textured monochrome areas via aquatint, LeWitt is able to encapsulate the basics of etching and progression, yet allows each element to stand on its own.

Giulio Paolini, through found objects, drawing, photography, sculpture and installation, has explored ideas of absence, centrifugal and centripetal forces, continuation, repetition and variation, all within the framework of art-making as visual subject.  His piece, ”Phoenix”, utilizes the artistic technique of one point perspective (a method of representing three dimensions/depth/scale in two dimensions), along with sections of constellations (artificially figurative delineations of otherwise unrelated and spatially dispersed stars) and images of eighteenth-century Valets de Chambre (fully rendered figures that use form and shading to depict three dimensions in two dimensions).  Each of these images has empty space (whether within the images created, whole sheets of paper with nothing on them or literally a square cut out from the middle of the center panel).  The depicted, drawn and physical squares are all directly related – the larger images of constellations are the size of the central drawn square.  The removed square in the middle is the same size as the white squares in the larger constellation depictions, etc.  However, things dont quite make sense – the larger images are repeated in the smaller images, yet the cut-outs are not there and the coloration is slightly different.  These conundrums of comprehension are basic parts of Paolinis practice.  In addition, it is interesting to remember the title of the work and the myth of the Phoenix – a phoenix is a long-living bird that is cyclically regenerated or reborn.  Associated with the sun, a phoenix obtains new life by arising from the ashes of its predecessor.  With this in mind, the work takes pride in the regenerative nature of looking in and out, as well as back and forth.

Along with the Paolini and the LeWitt, Haim Steinbachs “bear with me” examines comprehension, familiarity, repetition and time.  The work consists of found objects (a bronze bear statuette, two wooden bocce balls and a Kong rubber dog chew) and a skillfully crafted and artistically specific shelf.  This single shelf (truly much more of a sculptural element than a shelf) has three sections – one for each form.  The substructure is made from plywood with skillfully adhered veneer.  Two surfaces are left without veneer and thus poetically state that they are unfinished and that more sections of the shelf could be added.  On each section is a found object with similar formal properties.  The dog chew is three interconnected spherical forms.  The bocce balls are each a spherical form.  The bear is rotund and can be viewed [with some imagination] as being one, two or three roundish forms.  Steinbachs juxtaposing these three forms and placing them so specifically on such a specific support structure (the shelf) are his main gestures.  He not only gives the viewer the opportunity to see the formal relations, but also causes a situation of wonder about materiality (bronze, wood, rubber, veneer) and about interconnected-ness (playing with a dog, playing a game of leisure and perhaps the game of hunting).  Most importantly, as emphasized by the veneer and the lack-there-of – Steinbach asks the questions of connections and relationships – what else could be connected, how deep or superficial are connections and what is the history of any of the situations or support structures to help create or expand those situations.

As one can see, these three artists, through vastly different materials and imagery have created three interconnected works about the relationship of segments to a whole, and the question of whether there is an actual whole. 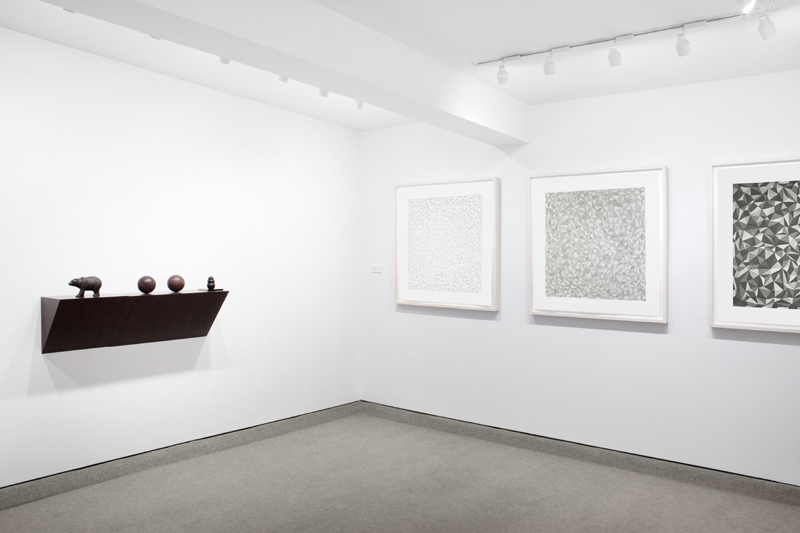 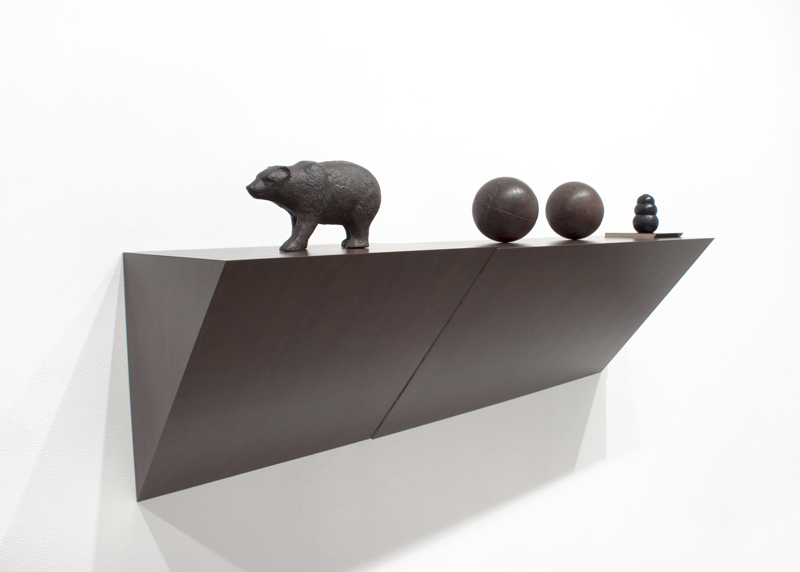 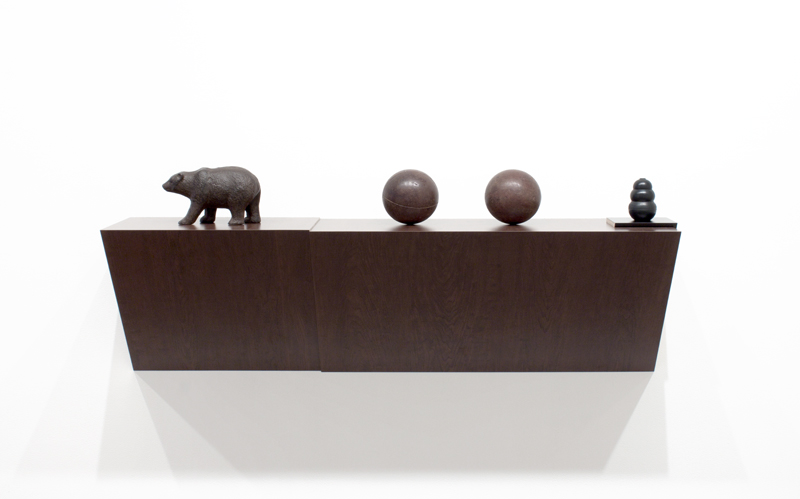 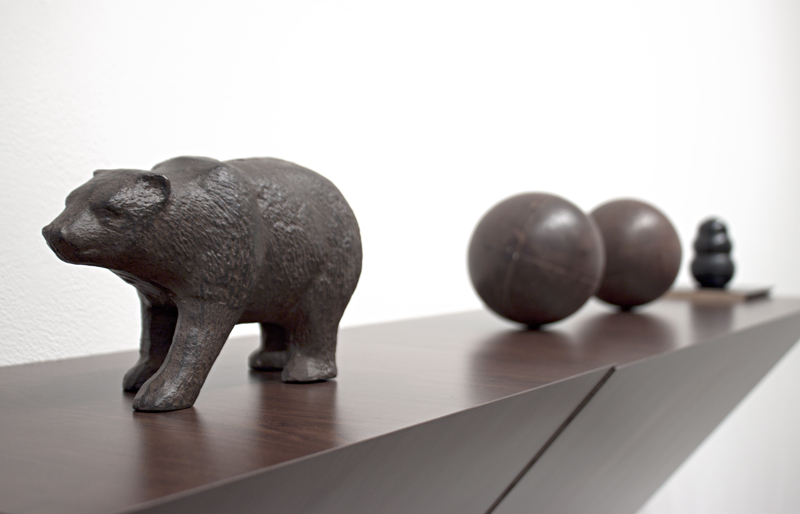 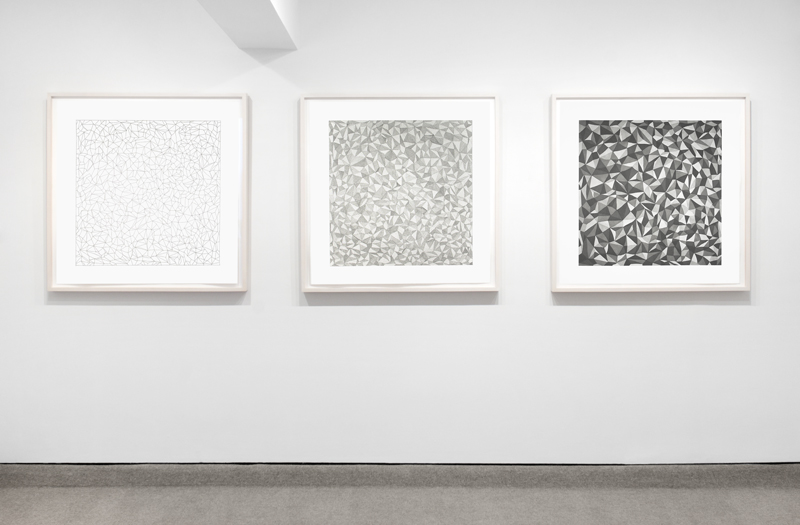 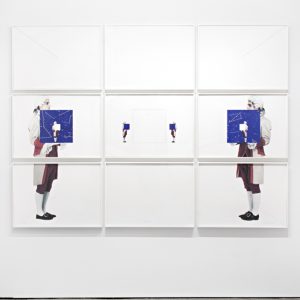 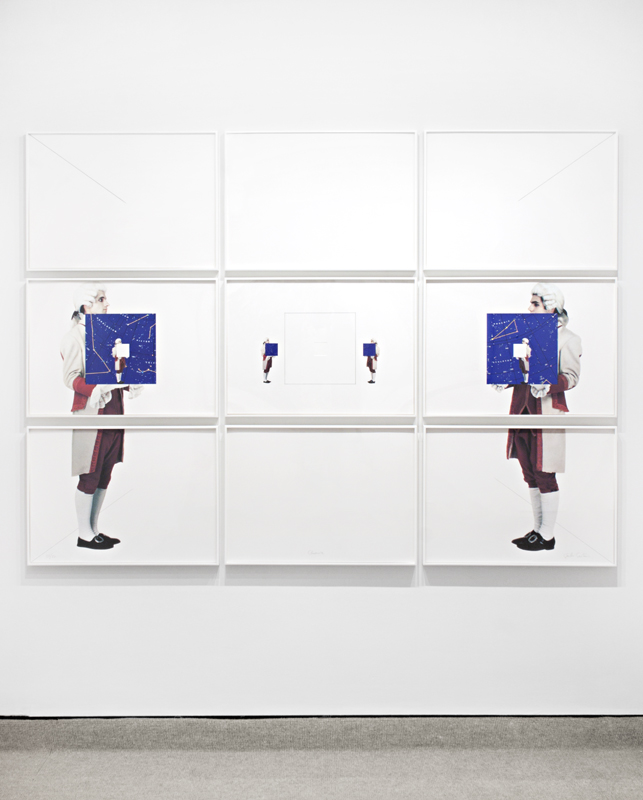 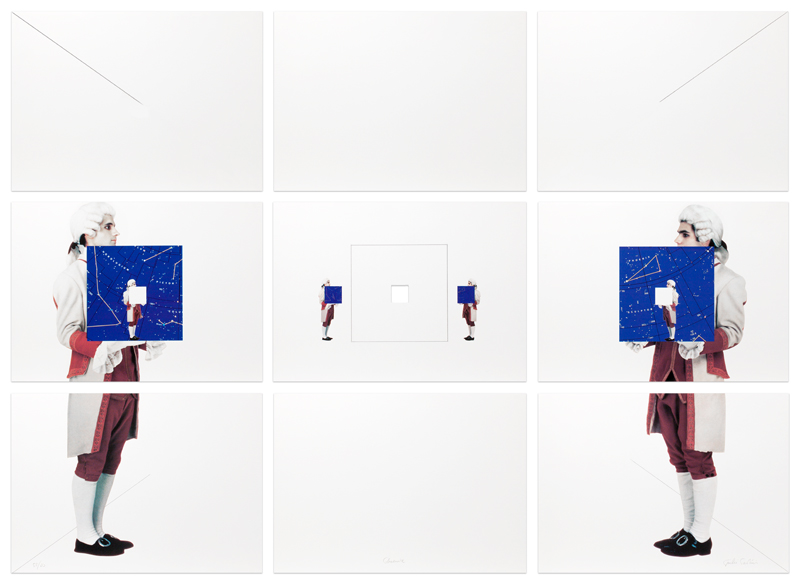