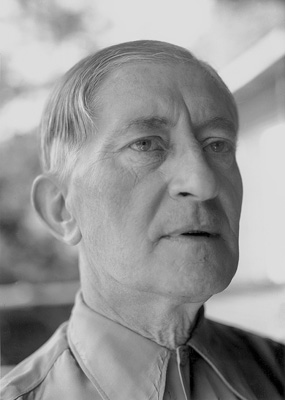 Joseph Albers was born March 19, 1888, in Bottrop, Germany.  From 1905 to 1908, he studied to become a teacher in Büren and then taught in Westphalian primary schools from 1908 to 1913.  After attending the Königliche Kunstschule in Berlin from 1913 to 1915, he was certified as an art teacher.  Albers studied lithography in Essen and attended the Academy in Munich before entering the Bauhaus in Weimar in 1920.  There, he initially concentrated on glass painting and in 1922, as a Bauhausgeselle (journeyman), he was in charge of the Bauhaus glass workshop.  In 1923, he began to teach the Vorkurs, a basic design course.  When the Bauhaus moved to Dessau in 1925, he became Bauhausmeister (professor).  In addition to working in glass and metal, he designed furniture and typography.

After the Bauhaus was forced to close in 1933, Albers emigrated to the United States.  That same year, he became head of the art department at the Black Mountain College, near Asheville, North Carolina, where he continued to teach until 1949.  In 1935, he took the first of many trips to Mexico, and in 1936 was given his first solo show in New York at J.B. Neumann’s New Art Circle.  He became a United States citizen in 1939.  In 1949, Albers began his first studies, in black and white, for the famous Homage to the Square series.

He lectured and taught at various colleges and universities throughout the United States and from 1950 to 1958 served as head of the design department at Yale University, New Haven.  In addition to painting, printmaking, and executing murals and architectural commissions, Albers published poetry, articles, and books on art.  Thus, as a theoretician and teacher, he was an important influence on generations of young artists.  A major Albers exhibition, orgainized by the Museum of Modern Art, New York, traveled in South America, Mexico, and the United States from 1965 to 1967, and a retrospective of his work has held at the Metropolitan Museum of Art, New York, in 1971.  Albers lived and worked in New Haven, Connecticut, until his death there on March 25, 1976.