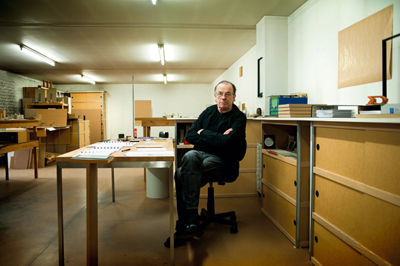 Peter Downsbrough has developed a strongly reduced visual vocabulary, which he uses to investigate the given space in a very personal and precise way. His material consists of letters and lines. He uses adhesive letters, forming conjunctions, prepositions, verbs and/or nouns and applies them to the walls, floors and/or ceilings. Lines, for which he uses cloth tape, emphasize certain architectural elements. Metal pipes, in the space and sometimes on the wall, accentuate the space. Areas defined by lines or painted black sometimes play a role, and, with the lines and the words reveal the architecture of interior or exterior spaces.

This rigorous treatment of the space continues in Peter Downsbroughs books, maquettes, photographs, videos or prints. They all reveal an extreme coherence, which some situate in the minimal and conceptual art movements.In the course of time, the spatial interventions with the parallel vertical pipes or dowels have been complemented with words, lines and planes. Conjunctions such as AS, IF, BUT, FROM, MAAR, OP, EN, ET, OU, MAIS have a double function: they work as iconographic signs which underline and reveal the space, and they offer the viewer the possibility to go, in his/her mind, from one thought to the other. For a conjunction is a word that cant be declined or conjugated; it establishes a connection between sentences or parts of sentences.

Peter Downsbrough: With the word, one takes part in a dialogue, a discourse on its precise meaning.() The word for me is an object. It has both a precise and a vague meaning. It is a universe one is confronted with. But there is no obligatory way of reading.