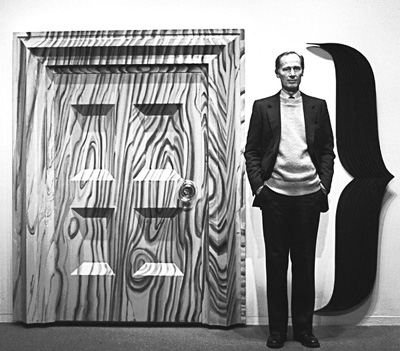 Richard Artschwager (1923-2013) was an American sculptor and painter.  During the 1950s he designed and made furniture in New York, but after a fire that destroyed most of the contents of his shop in 1958 he turned again to art, initially painting abstract pictures derived from memories of the New Mexican landscape.

Artschwager had the idea of producing sculptures that mimicked actual objects while simultaneously betraying their identity as artistic illusions.  At first these included object trouvés made of wood, overpainted with acrylic in an exaggerated wood-grain pattern, but he soon developed more abstract or geometrical versions of such objects formed from a veneer of formica on wood.  His preference for synthetic materials considered to be in debased taste together with his references to everyday objects were central to his response to Pop art.  Similarly his blocklike sculptures had much in common formally with Minimalism.

From 1962, Artschwager also painted grey acrylic monochrome pictures, basing his images on black-and-white photographs, characteristically of modern buildings as shown in property advertisements, as in Apartment House (1964; Cologne, Mus. Ludwig).  Gradually his paintings became more complex and mysterious, the surface subsumed in a pattern of flickering light, for example in “The Bush” (1.22 x 1.79 m, 1971; New York, Whitney).  His emphasis, however, remained on ambiguities of perception-on the interaction of observation and illusion-especially in sculptures conceived as hybrids of recognizable objects, such as Book III (Laokoon; formica on wood with metal handles and vinyl cushion, 1981; Paris, Pompidou), part lectern and part pew.