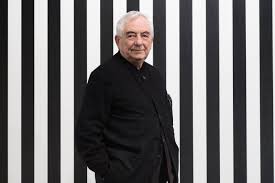 Daniel Burens exhibitions and installations are conceived and created solely from their architectural and institutional settings. Buren uses the term in situ to describe the relationship between his work and the sites where they take place. A work in situ exists only in relation to the specific place that prompted it. In his work, Buren addresses characteristics of the host space and, in doing so, tends to transform it.

Buren examines a sites structure, architecture, layout of rooms, exits, hallways, staircases, and windows. He also considers the more abstract aspects of a given space: the network of social, economic, and political forces at play in any given context. Because his work considers this constellation of variables, each is particular to the site it inhabits. From their very conception, his works are closely related to settings that represent the scenarios of everyday living. They are meant for and exist through direct interaction, eliciting the viewers sensibility, intelligence, and reflections.

In 1971 Buren conceived one of his first large scale in situ pieces for an exhibition at the Solomon R. Guggenheim Museum. Peinture-Sculpture (Painting-Sculpture) focused on the Guggenheims Frank Lloyd Wright architecture and the buildings orientation around an open spiral ramp. The museums open central area, known as the rotunda, is topped by a circular skylight. Daniel Burens proposal involved hanging a 66 x 32 ft. canvas banner with his signature vertical stripes in alternating white and blue. The work would bisect the rotunda from top to bottom. As the viewers traversed the circular ramps, at times they would see a flat expanse of canvas, similar to a large painting. But as they continued around, the banner could also be experienced as a sculptural object. The project was indeed in situ; it specifically addressed the museums imposing architecture and transformed the way it functioned. Burens work engendered criticism from several other artists in the exhibition. Before the official opening, it was removed. Burens current in situ work at the Guggenheim continues the dialogue between the artist and the museum that began more than thirty years ago.