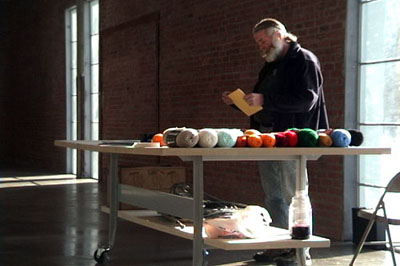 Fred Sandback was born in Bronxville, New York, in 1943. After receiving a B.A. in philosophy at Yale, he studied sculpture at the Yale University School of Art and Architecture. Sandback’s first one-person exhibitions were at the Galerie Konrad Fischer, Düsseldorf, and the Galerie Heiner Friedrich, Munich, both in 1968. Since then he has exhibited widely both in the United States and abroad. His work was included in the Whitney Museum of American Art’s Annual exhibition of 1968, the Biennale of Sydney, 1976, and the Biennial Exhibition of American Artists at the Art Institute of Chicago in 1979. In 1981 the Dia Art Foundation initiated and maintained a museum of his work, the Fred Sandback Museum in Winchendon, Massachusetts, which was open until 1996. Dia itself presented exhibitions of his works in 1988 and in 199697. Sandback died in 2003.

In 1966 I found myself engaged in a sort of assemblage of odd pieces of industrial material, connected in series. The singsong interrelationship of the parts didnt have much energy or conviction. In response to my complaints about sculpture in general, and the incoherence of mine in particular, George Sugarman said something to the effect, Well, if you are so sick of all the parts, why not just make a line with a ball of string and be done with it?

The first sculpture I made with a piece of string and a little wire, was the outline of a rectangular solida 2 x 4 inchlying on the floor. It was a casual act, but it seemed to open up a lot of possibilities for me. I could assert a certain place or volume in its full materiality without occupying and obscuring it.

I think my first attraction to this situation was to the way it allowed me to play with something both existing and not existing at the same time. The thing itselfthe 2 x 4 inchwas just as material as it could bea volume of air and light above the surface of the floor. Yet my forming of it, the shape and dimension of that figure, had an ambiguous and transient quality. It was funny tooit had an anecdotal quality on the order of first there is a mountain, then there is no mountain, then there is. . . . but in reverse.

I didnt have a highly defined set of goals at this point. I did, indeed, want to make sculptureand I suppose thats interestingI didnt draw much of my impetus at all from the American painting of the 1950s, or at least not nearly as much as from older sculpture. I spent one summer trying, with limited success, to draw Michelangelos slaves every day.

When I got around to the first string pieces, it wasnt so much, in retrospect, that I wanted to make sculpture without a composition of parts, or sculpture without positive and negative spaces, as that I just wanted to make sculpture and these other things just seemed to be getting in the way.
I did have a strong gut feeling from the beginning though, and that was wanting to be able to make sculpture that didnt have an inside. Otherwise, thinking about the nature of place, or a placemy being there with or in itand the nature of the interaction between the two was interesting. And at that point the thinking was perhaps more interesting than the doing, though its of course the latter that has sustained my interest.

My feeling persists that all of my sculpture is part of a continuing attitude and relationship to things. That is, sometimes, I dont see various sculptures so much as being discrete objects, but rather more as instances of a generalized need to be in some sort of constituting material relationship with my environment. The sculptures address themselves to the particular space and time that theyre in, but it may be that the more complete situation that Im after is only constructed in time slowly, with the individual sculptures as its constituent parts. I dont feel that once a piece is made, then its done with. I continue to work with older schemata and formats, and often begin to get what I want out of them only after many reworkings. Though the same substructure may be used many times, it appears each time in a new light. It is the measure of the relative success of a piece, not necessarily that a new structure emerges, but that a familiar one attains, in its present manifestation, a particular vibrancy or actuality. It seems to work best when the format is so fully internalized and taken for granted that it doesnt demand much of my active concern. Like the U-shaped freestanding pieces that I started work on in Bregenz in 1973. Im still using that shapeits more like a tool or a musical note that I can push around until I get it right. Theres a lot of push and pull in these pieces.

Straight lines tend to be perceived as purist and geometrical, and I am forever being warned to loosen up, as when Spoerri prescribed great bowls of lentil soup to cure me of my puritanical fanaticism. Its a consequence of wanting the volume of sculpture without the opaque mass that I have the lines. They are more or less simple facts though, and not instances of a geometry or some other larger orderjust what the hand does.

The line is a means to mediate the quality or timbre of a situation, and has a structure which is quick and abstract and more or less thinkable, but its the tonality or, if you want, wholeness of a situation that is what Im trying to get at. My intrusions are usually modest, perhaps because it seems like its that first moment when things start to coalesce that is interesting. Most of my work now is executed in and for a particular place. Its always been conceived with at least a generalized sort of place in mind, but these pieces are now bound to one site. This doesnt mean that I wont redo a piece in a new location, but it will be a whole new kettle of fish. There are things that I want to do, but until they have a place they remain necessarily vague and indeterminate. The work is about any number of things, but being in a place, would be right up there on the list.

Around 1968, a friend and I coined the term pedestrian space, which seemed to fit the work we were doing at the time. It certainly wasnt paintings space that we were after, nor that of sculpture, for the most part. Pedestrian space was literal, flat-footed, and everyday. The idea was to have the work right there along with everything else in the world, not up on a spatial pedestal. The term also involved the idea of utilitythat a sculpture was there to be engaged actively, and it had utopian glimmerings of art and life happily cohabiting.

In the summer of 1977, I had the opportunity to use about 10,000 square feet of space at P.S. 1 in Long Island City, as a studio for a month. I had developed a need in the years prior to this for increasingly large and unwieldy formats, and this had led inevitably to the result that I could only build one piece at a time in my studio. Exhibitions, too, often consisted of only one image. Hence it was difficult for me to correlate my experiences, and almost impossible for a spectator to see enough to get what I was up to.

Having these seven huge rooms to work in was a small revelation, in that I was able for the first time to see how these pieces acted together and to work with them simultaneously. It was a chance to crystallize some of the things that I had been pecking away at one at a time, but more than anything, a chance just to do a lot of work in the same place. A usual consequence of my work is that not too much of it can exist in any one place for too long.

The Museum in Winchendon, which began renovation in 1978 with the caring patronage of the Dia Art Foundation, offered some remedy to my feeling that things were just too diaphanous. Id been building work for twelve years that had almost completely ceased to exist. I was not producing a product that could be easily acquired or preserved, and I felt a great need for a sense of material continuity and permanence. The idea of having ones own museum is quirky and amusing, but I did feel that the work ought to exist somewhere in a reasonably dense and permanent grouping, outside of the three-week stands that were the approximate limit in galleries.

This permanence, once established with the opening of the Museum in 1981, did indeed produce the necessary sense of having some ballast, and designing the interior space and the work was a source of great pleasure. But it was a surprise to see how quickly it became something on its own, not necessarily connected to me. Once the work was done, it was done, whereas I had a continuing need to disrupt that permanence that I had wanted. Perhaps indeed, I have nomadicized my existence.