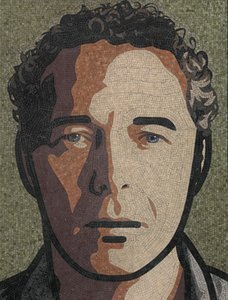 “Everything you see is trick of the light.  Light bouncing into your eye, light casting shadows, creating depth, shapes, colours.  Remove the light and it’s all gone.  We use vision as a means of survival and it’s essential to take it for granted in order to function, but awareness allows us to look at looking and by extension look at ourselves and be aware of our presence.  Drawing, drawing out the way that process feels and works brings the awareness into the present and into the real world, the exterior world.  By drawing I have made a thing, lots of things which are nothing really, useless, but I can show them and look at them and get other people to look at them and see if it can do the same for them.  Artworks are like little experiments designed to bring out, mimic, reveal what is already there but hard to hold.  There are standard ways of doing this but blundering around trying to invent new versions makes it fresh and relevant.  I set up projects, experiments, based on previous successes that I feel could be better or go further.  Some observation or variation suggests to me that I could make a new work.  I vaguely sense a possibility and need to build a model to test it out.  I gather resources and in the process of building I rely on trial and error and instinct to squeeze success out of the elements.  Things often don’t go to plan and I’m forced to side step or back down in order to get it to work.  It’s nearly always an “only just” situation, a last second hop from failure to success and even then I have my doubts but if I enjoy the work and want to show it to people I feel it’s probably good to go.

Julian Opie makes paintings, sculptures, films and installations in public spaces. In his works, he employs electronic media to widen the boundaries of the traditional media such as oil painting or sculpture. The person has a key place in his art, and is often represented in movement. He portrays members of his family, friends and workers at his studio as well as anonymous passers-by and commissioning collectors. He usually draws his characters by using a black line filled with a strong, clear colour echoing the language of signs and symbols. He is interested in landscapes; he strips them of detail, bringing to the fore their essence. He has been inspired by a variety of phenomena: from the aesthetics of road signs, billboards and corporate logos, through Japanese prints to old master portraits, ancient Roman Greek and Egyptian sculpture to manga and comics.

Opie not only focuses on museum and gallery exhibitions, he also uses other opportunities and spaces to create and exhibit art. He is well known for his album covers including the album of the British group Blur Blur: The Best of (2000). He has worked on numerous stage sets and public works in cities around the world.

Julian Opie is one of the most well known contemporary British artists. His works can be found in the collections of many public institutions throughout the world, including Tate, the National Portrait Gallery, the Victoria and Albert Museum and the British Museum in London, The Israel Museum in Jerusalem, the Kunsthaus Bregenz in Austria, the Kunsthaus Zürich in Switzerland, the Neue Galerie Sammlung Ludwig in Aachen, the Stedelijk Museum in Amsterdam, the National Museum of Art in Osaka, the Museum of Modern Art in New York and also in the MOCAK Collection, and Museum of Contemporary Art Krakow.